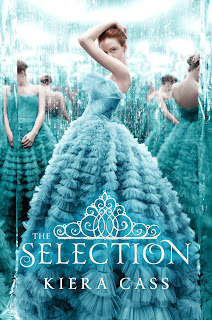 I'm reading The Selection by Keira Cass. I'm also reading Wizard's First Rule, Truckers, This Is Not a Test, Lords of the Rings (again), and many others.

This one, from HarperTeen, has promise. It seems a bit of an X-Factor meets Hunger Games meets Don't Tell the Bride mash up, but it may come into it's own a bit later.

The cover is fantastic, but that in itself shouldn't be the reason to buy it (it wasn't - I bought it on recommendation) but it's a big pull all the same. I've read so much YA in the past year that maybe, just maybe, I am a bit jaded on the sector, but this is shaping up to be a good read. More when I've completed it.
Posted by The Write Thought at 10:22 No comments:

Instant Health: The Shaolin Qigong Workout For Longevity by Shifu Yan Lei
My rating: 5 of 5 stars

This utterly superb book not only beautifully details how to do the stretches, but has many pearls of wisdom littered throughout the book.

I don't think this book is aimed at beginners, though they could pick up much from this.

As a huge fan of Bruce Lee's 'Tao of Jeet Kune Do' and 'Fighting Method' books, it is no small matter finding a fine martial arts book.

The book is a work of art - but it has the substance to back it up and that is a major achievement.

Shifu Yan Lei is the real deal - you can tell that. So many 'master's prefix their name with such titles and in some cases, they are great at what they do. This man is a case in point.

If you are a martial artist, or just want tips to stay healthy and strong into old age (as opposed to just living to an old age) - buy and learn from this book.

View all my reviews
Posted by The Write Thought at 14:07 No comments:

Dark Winter - Back cover is done! 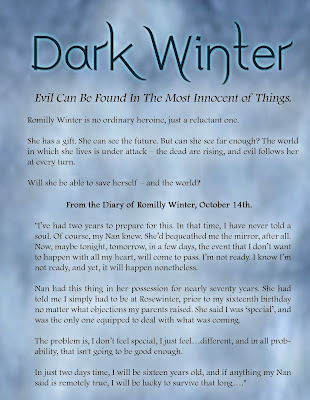 Here's the back cover to the book. Thanks to the very awesome Ashley at The Bookish Brunette for her terrific work!!
http://www.bookish-brunette.com/

Posted by The Write Thought at 12:18 No comments:

They say 'don't judge a book by its cover' and that is so true, but what is also true that 'Anna Dressed In Blood' has one of the most strikingly awesome and at the same time, hauntingly beautiful covers that I've ever seen.

One thing writers have to do is make their star character as real as they can - so that you feel, what they feel. Another thing that is needed is a character to play off against, that is at least as interesting as the character of the title.

In this aspect, Kendare Blake has succeeded and then some. Anna is a truly terrifying ghost, but she's made more real to me not by her interactions with those she ***SPOILER ALERT*** ultimately kills (and who didn't cheer a lot when Mike got his comeuppance? Maybe I shouldn't be happy about that, but I was, as Cas says so honestly later in the book 'Mike was a d*ck').

The gore factor is rather high in this book, but that's okay - there is no need to spare readers of the 'gory details' because from the off, this book is about killing, and lots of it.

If the mystical story of the athame had not been so well built up, I am not sure I could 'buy' the fact it sends ghosts back to the nether world....but again, all the key points are told so well, you are just carried along with the story.

All the characters have a purpose, but it's Cas, our hero, and Anna - yes - our heroine - an anti-heroine' if you like, but still, the kind of girl I like :)

So Anna rips a few people apart and blood drips from her body, and she's got weird veins...also her dry clean bill must be horrendous - but she comes across as terrifying and yet you just can't fail to be attracted to her.

I totally buy the feelings Cas has for her, because they are two sides of the same coin - Anna kills because she can't help it - Cas kills because he simply has to. In both cases, it's in their blood.

This is not a 'young' YA book. I expect it would hit a 15 even an 18 certificate if it ever appeared in UK cinemas.

Thankfully, Kendare Blake has crafted a wicked tale that is not a case of 'Ooh! It's a ghost!' - no - the scares are more clever than that, and I honestly didn't see the twist until the end...which made the book even better.

It's such a pleasure to read a book that works on every single level - great story, believeable characters - and you will be rooting for Thomas, Carmel, and Cas's mom for different reasons to how you feel about Anna and Cas.

What will live with me is the vivid description of Anna. She's got her back to you on the cover, and be glad for that wise decision by the creator of the cover, because having read the book, you will be in no doubt what Anna looks like, and I'm not sure I'll be able to sleep without Anna's devilish stare pervading my sleep just before REM kicks in.

Kayako from The Grudge? Anna is MUCH more scary than that!

Bravo to Kendare Blake - I wait with great anticipation for 'Girl of Nightmares' in June 2013.
Posted by The Write Thought at 08:51 No comments: