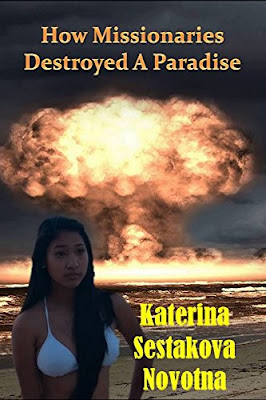 Laa, a girl from Bikini Atoll, is very naïve. She does not always understand men, philosophy of religion and the world in general since she has spent most of her life on an isolated island with limited access to information.
She has studied closely only three books: “The Marshallese Bible,” “Princes and Princesses” and “The Christmas Book.” Yet she does her best to interpret these sources, and confronts them with her own daily observations.
It seems obvious to Laa that American missionaries were mistaken about many things. How could an all-good, all-wise and all-powerful God forget about Laa’s ancestors? Why did He not let them see the Star of Bethlehem thousands of years ago, if it is so important to know and accept Jesus? Were they all damned merely for being born in the wrong place at the wrong time?
Many questions puzzle the young woman while she is falling in love with an American man. He seems to take advantage of her gullible nature, and she soon goes through many other hardships, which make her wiser and stronger.
One day, Laa finally sees a colorful light in the sky that looks even more magical than the Star of Bethlehem in her Christmas Book. It is the star of Bikini. It seems to Laa that God has decided to address her doubts and answer all her questions. It does not really matter that the star turns out to be just a blast caused by one of sixty-six atomic bombs detonated on the Marshall Islands between 1946 and 1958.

How Missionaries Destroyed a Paradise is an intriguing work from Katerina Sestakova Novotna. Set against the idyllic background of the Marshall Island, the story is about a sexual awakening of Laa, a local girl on the tiny locale named Bikini Atoll.

With a population of a mere 167, there are not many men to choose from on the island as potential sexual partners, certainly not a pool large enough to consider marrying one of them. As the story begins it is set in the 1940s, the book’s cover giving an ominous warning about the story’s backdrop – the horrors that unfolded in Hiroshima and Nagasaki when the Americans dropped the bomb on Japan. Yes, it ended the Japanese participation in WWII, but this has been well documented in history and recycled on the silver and small screen alike.

The author chooses to inform us about the little known Bikini Atoll and its Marshellese speaking people. As is quite rightly pointed out in the narrative, to most people, a bikini is a woman’s two-piece swimsuit, but if you have read the author’s other works, you’ll definitely be more informed and educated than you were prior to picking up the book.

Laa may be young and naïve, but she is aware of her sexuality and observes how other women close to her, for example her Grandma or her married sister Rostianna behave as adult women and also how they deal with the subjects of sex, love, marriage and of course, growing up.

"Throughout the story, one gets a sense that something terrible and yet undeniable is building."

It’s hard not to like Laa almost immediately. She has an innocent, old world charm about her that only covers her smouldering sexuality on the surface. To some readers the book may appear to be too overt in its approach to sex, but for this reader, I observed a woman who wanted the simple things in life – someone to love, someone to love her, someone to make her feel fulfilled sexually and also to share a life and grow together. Laa could see conflict with her married with children sister and her carefree and sage-like grandmother. It seemed she wanted parts of both women’s personality reflected in her own, whilst carving out a way for herself.

Laa certainly held strong views on many things, opinions that brought her into frequent conflict with the local pastor. It was not that Laa was necessarily anti-religion, it was more a case that she saw hypocrisy where the ones preaching it did not. It’s easy to be brainwashed if there is little between your ears in the first place.

As the story picks up apace, other men, namely American soldiers appear on the island. Laa had never seen such men, with their different coloured eyes, hair and skin. Not to mention that these men were not backward in coming forward in their affections towards Marshallese women. Indeed, it is one soldier, Benjamin, that Laa takes a particular interest in, having been let down by the local appple of her eye, Neljin. He seems scared of Laa’s interest in him but in some ways, he awakened her curiosity about the opposite sex.

This story has an array of well defined characters, none more so than Laa herself. He actions and behaviours may seem at conflict with her emotions at times, but I think this is what makes her more real as a character.

Throughout the story, one gets a sense that something terrible and yet undeniable is building. The cover gives an indication but the author’s wordcraft is far more clever than that, never dumbing down or insulting the reader’s intelligence. That said, this is a book strictly for adults only.

The author is not shy in including characters we may not necessarily like, but neither are they included as a mere contrived plot device. By the story’s latter third, I defy anyone not to be feeling for Laa and her people as the ‘tests’ now being carried out in ‘safety’ by the soldiers begins to take hold.

Posted by The Write Thought at 03:27 No comments: