1."The Psychiatrist and the Thief," is a comedy- mystery .
2."Her Online Predator" is an exciting mystery - thriller /romance. It is a must read especially for young people who like to make friends on the Internet..That friend you make may not be who he/she claims to be.
3."A Marriage on the Rocks," is about a young couple who had serious problems in their marriage. Did their marriage survive?
4."The Undertaker's wife" is about a suspicious wife who doubted her husband.

5."Letters of Love" A loving brother seeks to guide his sister on the right path with his spiritual wisdom.

Review: This is the second collection of stories I have read in a row. This author is new to me so it is interesting to pick up this writer's particular 'voice' and over the course of this book, it comes across well.

Her Online Predator is perhaps the best of a strong bunch of stories, with Marriage On the Rocks a close second (though the male character Roberto was a little to subservient to his wife for my liking). The Undertaker's Wife has a wonderful underlying plot - we can probably see what is coming before the end, and its cool to see the MC freaking out along the way, before the big reveal is made.

All the stories are well written and readable. The stories are different from each other and make for interesting reading. Recommended.
Posted by The Write Thought at 07:47 No comments:

Book Review: The Clock Man and Other Stories by Eric Lathi 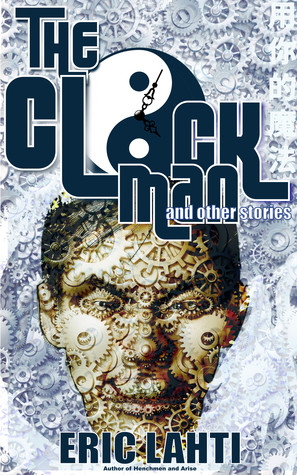 A woman waits in a plain white room, wondering why she's there and what's about to happen.
A man and his talking gun hunt the bogeyman.
A family finds its house is haunted and sets out to trap the ghosts, but what if the ghosts aren't the real problem?
Far underneath a city, the figure of a man rests. For decades he's remained perfectly motionless. Last night he moved.
In a world of magic, martial arts, and dragons, one man controls the flow of magic. Now his daughter wants him dead.
Zapp Blander always dreamed of being a hero. When a man named Jack shows up, Zapp might just get his chance.
She was designed to choose which slain warriors got to go to Valhalla, but Kara has developed her own ideas.
The bogeyman of New Mexico is beaten and fed what should be a simple task: Kill the boy.

"Like every other senator, Bedfellow feels slightly dirty after intermingling with the people he claims to represent."
- Awaken.

The Clock Man is the key part of a delectable sandwich, a cocktail of explosive tales that are as addictive as they are compelling. Entering the world of this author, especially in this collection, requires perhaps more than one read.That's why my rating is around 4.5 stars. There's enough five star awesomeness in this book to round it up though.

The Clock Man is by far the longest story, almost reading like a mini-novel in itself. I'm glad the author decided to add other gems in here, the David Lynch / Oliver Stone-esue 'Zona Peligrosa' (you can just feel Leonard Cohen and Charlie Weathers eeking out the soundtrack).

I read the stories in order, and the opener 'Exceeds Expectations' certainly does that.

Awaken brings us back into the world of the Henchmen, the author's prior works, and it's a welcome addition. It's like the author is saying 'this story is for everyone who loved Henchmen'.

Near to the close is 'Eve', a nod to one of the major characters in the Henchmen series. I thought this one would be stronger than it turned out to be. Perhaps if you haven't read Henchmen you will enjoy this segment all the more.

There's a poetic quality to this author's writing punctuated with snappy dialogue and a believable narrative. Add to that the author's talent for the descriptive - you have a sense of your surroundings even when you're lost. If I ever find myself in a desert without a compass, I'm bringing Eric Lahti along for the ride.


Buy on Amazon
Posted by The Write Thought at 00:14 No comments:

Book Review: The Heir (The Selection, #4) by Keira Cass

Synopsis: Princess Eadlyn has grown up hearing endless stories about how her mother and father met. Twenty years ago, America Singer entered the Selection and won the heart of Prince Maxon—and they lived happily ever after. Eadlyn has always found their fairy-tale story romantic, but she has no interest in trying to repeat it. If it were up to her, she'd put off marriage for as long as possible.

But a princess's life is never entirely her own, and Eadlyn can't escape her very own Selection—no matter how fervently she protests.

Eadlyn doesn't expect her story to end in romance. But as the competition begins, one entry may just capture Eadlyn's heart, showing her all the possibilities that lie in front of her . . . and proving that finding her own happily ever after isn't as impossible as she's always thought.


Review:  The Heir is easily the best book in The Selection series, and I was surprised as anyone that after the events in The One, that the author would be penning further adventures in Illea. In full disclosure I must state that I found America 'Mer' Singer from the earlier books a so-so MC. Then along comes her daughter Eadlyn in book four and she is totally different. She's brattish, arrogant and spoilt. You might think this is a recipe for disaster especially when her father Maxon proposes a new Selection take place.

The Heir sees the Selection all grown up.

Here is where the author has got it right - in book one it was lacking a dystopian feel, and by the time of The One it seemed to have dropped the pretence that it was ever a dystopian series. The Heir works better in the understanding of the ruling monarchy and its subjects - Maxon only proposes a new round because it keeps the masses distracted.

Isn't that what all governments want for their people? Distraction, control, with the media (state or otherwise) filling the airwaves with bad news.

And it gets worse for Eadlyn, because some of the guys in the Selection do not want to be there at all. There's no fawning over each other with Eadlyn and Kile unlike the protracted Maxon-Mer-Aspen mess.

The Heir sees the Selection all grown up. It's an entertaining read that fans of the first trilogy may deem unnecessary, but I think Eadlyn is by far the most interesting character, and the story is all the more readable for the focus on her.
Posted by The Write Thought at 01:53 No comments:

Email ThisBlogThis!Share to TwitterShare to FacebookShare to Pinterest
Labels: keira cass, romance, the elite, the heir, the one, the selection, YA
Newer Posts Older Posts Home
Subscribe to: Posts (Atom)