Book Review: Where She Belongs by Liz Doran 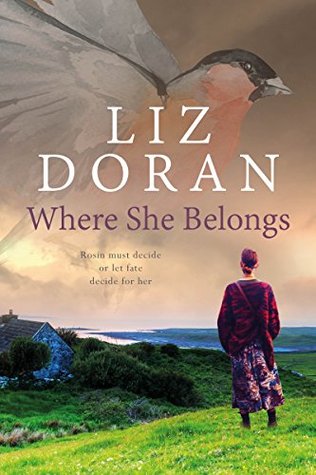 Roisin has had enough. After the recession hit Spain, her husband, Javier, has fallen into an abyss of depression and is threatening to drag her down with him. In order to save them both, she leaves Spain and does something she has always dreamt of doing. To live by the sea. She wants to gain control of her life, make a new start and finally follow her dreams.

With a mixture of sadness and anticipation, she moves back to Ireland, rents a house by the sea, and has a fortuitous meeting with Maggie who runs a craft boutique.
At first everything runs smoothly. Maggie offers her a job and people are more than kind. Too good to be true? The last thing on her mind is another man. But then she meets Tom, the irresistible Irish man. When Javier follows her and tries to woo her back, confusion sets in. After perfect beginnings, where she meets some of the helpful and colourful characters who live there, things begin to get complicated. The first cracks appear on the façade. Why is her old neighbour, Mrs. Walsh, being threatened? What is she afraid of? And why are people suspicious of Maggie, her new friend and boutique owner?

Where She Belongs is a slow burner of a debut novel from author Liz Doran. Many of the best authors in the world hail from Ireland, where this book is set. It follows the ups and downs of Roisin, who (in a paradoxically shift of pace in the early chapters) has her life literally turned upside down an decides she has had enough of Spanish beau Javier.

Reading this from the male point of view may actually garner interest in this book. You see, I felt Javier had been hard done by. He’s not the model husband, and he does something that is practically unforgivable, but as this happens early on in the story, we haven’t learned enough to form a strong opinion as to whether he is the bad guy or not.

Clearly Roisin acts at first with her heart and then her head. The time lapse is not that long, and soon enough Roisin has decided to get out from the relative comfort of her life and start over again.

I applaud the author for taking this decision. It’s a woman’s story written for women, but that shouldn’t prevent male readers from reading Where She Belongs. It would have been an interesting angle to see Roisin stay post-the-event but that would have taken the story on a whole different direction.

The pace is steady. There’s a lot of information in the story that from the male perspective is less interesting but I can understand why it is in there, as the book would fall under women’s fiction.

"The author does not give us a cop out ending."

Roisin’s journey through Ireland is strongly depicted and if you have never been to the country, the author makes you fall in love with the place. Everyone knows that one person’s paradise is another’s idea of hell, and despite the brave new world Roisin chooses to go after, not everything falls into place. That would be too easy, and the author does not give us a cop out ending.

That said, whilst Roisin began to find herself and a new meaning to her life, it was only a matter of time before Javier popped up again. He’s not a one-dimensional psycho dumped husband like Patrick Bergin in Sleeping With the Enemy, and again, I was grateful for how the character was drawn.

Where She Belongs is an interesting debut novel that demands the readers’ attention. In some ways it is a very easy read, at other times, it is heart wrenching and touching.

A strong debut from Liz Doran.

Posted by The Write Thought at 04:31 No comments: