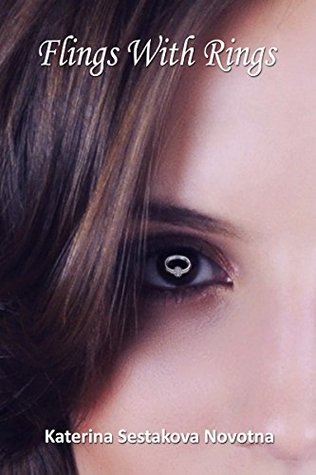 Evelina is a Hawaiian beauty with a strange hobby: she collects engagement rings from successful men without intending to marry them. She is showing her collection to a pious friend while revealing her secret tricks and opinions on men. Evelina's motivation to share her life story seems as mysterious as the reason why her friend keeps listening and asking questions despite their strong disagreement. Will Evelina's behaviour ever catch up on her?

Flings With Rings introduces us to Evelina, a woman on a quest to collect rings from men but not necessarily with a view to capture them as husbands, but to use and discard them as needed.

Told through a first person perspective, the friend of Evelina sees her acts through her eyes and hears them through her ears. She appears to be a more refined and decent woman, and is practically horrified at what she hears coming out of Evelina’s mouth.

However, it is hard to dismiss Evelina entirely. The half-Japanese half-Hawaiian beauty knows what she’s got and she is not shy to flaunt it.

She accurately depicts the well held view that men do want flings but not the commitment that a wedding ring would involve. As our first person point of view identifies, a ring should indeed symbolise love, but Evelina’s point is hard to dismiss entirely – she mentions how if a wedding ring was so special, it would be worn on more intimate parts of the body. That’s true, if not rather impractical.


"You have to decide if Evelina is evil or if the poor sap of a man actually deserves the treatment he gets."

Men would find it easy to dismiss Evelina as easily as she appears to dismiss them. Whether she is a likeable character or not is up to the reader to decide. For my own viewpoint, I found Evelina not the kind of woman I would want to know, but at the same time, she is not the kind of girl one would find easy to ignore. Moths to a flame, perhaps.

The twists in the story are many, but one that readers may enjoy and is not a spoiler to say so is that Evelina gets more joy out of collecting engagement rings than actually wedding rings.

Evelina does not ply her trade on every man though, she takes a perverse enjoyment in taunting one particular man. You have to decide if Evelina is evil or if the poor sap of a man actually deserves the treatment he gets.

As usual for the author, one can feel more enlightened and educated from reading her books. Flings With Rings is a short story, but not so short that you feel short changed. The story is packed with a really interesting character dynamic – we almost want Evelina to fail against somebody, but at the same time it is hard to deny that she has a logic to her actions that in her place, we would almost agree with.

The story is a clever and insightful study of marriage, it just utilises an interesting counterpoint about what men and women really want.

What I really like about this story is that it is brave enough to suggest that the best times are after an engagement but before a marriage. Not a lot of people say this kind of thing. Many would say that sex, at least in those initial months of marriage is the best, but this is not always the case, nor should it be, if we are honest with ourselves.

The story works not necessarily because we could relate to Evelina’s outrageous hobby, but perhaps because we cannot relate to it. She is a woman on a mission all of her own. Readers can condemn her, be fascinated by her, but one thing is for certain – she cannot be ignored.

Her looks are one thing – but maybe she has a dynamism about her that men cannot help being attracted to, and women might just appreciate her stance on men, sex and marriage to a larger extent than they may openly agree with.

Arguably Katerina Sestakova Novotna’s best written book to date, but in her growing library of works, there is some tough competition.


Buy on Amazon
Posted by The Write Thought at 01:59 No comments: