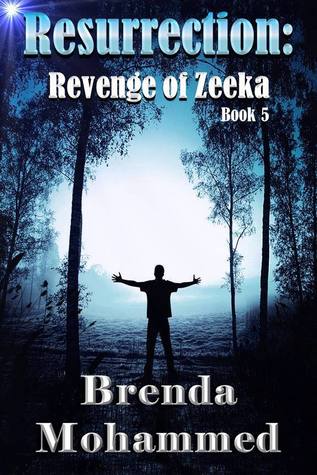 #New Release - Mandy’s new robot helper Eve encounters a stranger in the backyard.
He claims to have connections with Zeeka. Who is this stranger?
When he learns that Eve is a robot, he discloses his story to her.
Eve promises him to keep their conversation secret but can she?
‪She records it on her security device and plays it for Steven and Mandy. ‬‬‬‬
When he collapses in the backyard with an epileptic fit, Eve alerts the Gosh hospital
Tests and records reveal the stranger’s identity.
Police records show that he died in the Carnival massacre in 2036, but did he?
Steven faces opposition to launch his greatest invention of the century.
Who will be the first volunteer to test it?
For answers to all these questions read the final instalment -" Resurrection: Revenge of Zeeka Book 5 "for this intriguing story

In an entertaining conclusion to the Zeeka series, Resurrection brings the story full circle. If you haven’t read any of the stories in the series, it’s worth starting with book one ‘Revenge of Zeeka’ just to see the author evolve alongside the story and her characters.

For me, the high point of the series was this book’s predecessor, Zeeka’s Ghost, but then, as a reader I do like ghost stories and this paranormal element was handled well in book four.

This final installment is quite surprising as it brings back the rather disturbing character of Nine from book one. Nine is on a mission all of his own, and when he learns of technology that may save him from the Zika virus and help him on his ultimate goal (read to find out) – he’s all for the procedure, despite the risks.

Aside from this storyline the quirkiness of the robot Eve adds some humour to the story. The characters that have been with us throughout the series get a good send off too.

Buy on Amazon
Posted by The Write Thought at 10:13